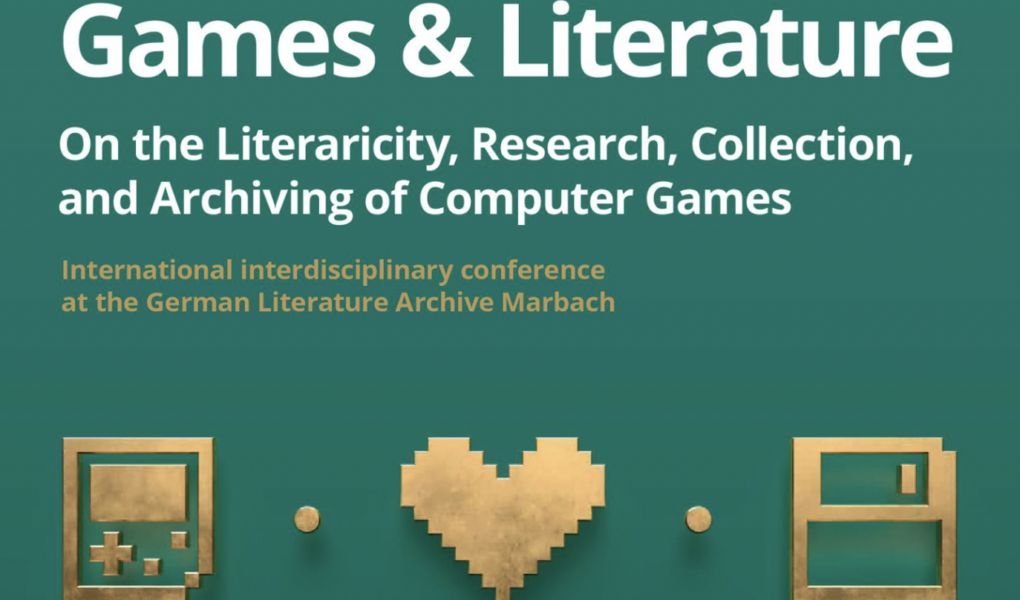 In cooperation with:
European Federation of Game Archives, Museums and Preservation Projects (EFGAMP e.V.), DIGAREC – Digital Games Research Center of the University of Potsdam, the Computer Games Museum Berlin, and the Foundation for Digital Games Culture

DLA Marbach and Computer Games
In addition to collecting literature in its commonly understood forms, the German Literature Archive Marbach (DLA) also archives and collects computer games as a medial form of literature. The aim of the DLA in doing so is to engage with literature in all its mediality. The substantive reasons for this decision are numerous, but, fundamentally, computer games have long been part of our cultural memory, which must be archived appropriately and examined in relation to established cultural forms. The fact that computer games are discussed in the feature pages of the major daily newspapers, that the German Federal Government awards the German Computer Game Prize, and that computer games are officially recognized as a cultural asset by the Cultural Council is due, among other things, to the work of museums such as the New York Museum of Modern Arts, the Computer Game Museum Berlin, and the Karlsruhe Centre for Art and Media (ZKM).

As an archive for literature, the DLA has been dealing with hybrid forms of literature for some years now, for literature is not only created and produced between two book covers, but also on the computer, as “born-digital” literature. Within the framework of the “Netzliteratur” project (2013–2017), the DLA has done pioneering work on the systematic analysis and documentation of the creation, playback, performance and mirroring environment of games in line with defined standards. This work is being continued in various projects at the DLA, but a larger international, interdisciplinary conference is needed to further discuss and advance these endeavours with regard to questions of collection and archiving as well as research. To this end, we invite literary scholars, archivists, librarians, as well as researchers in Games Studies, Media and Communication Studies, and game designers to Marbach.

The “literaricity” of computer games and the collection mandate of a literature archive
The planned conference will encompass various aspects of researching literature and computer games, as well as collecting, archiving, and exhibiting them. Although the intersections, as well as the differences, between literature and computer games have frequently been addressed in the last two to three decades, a systemization of these approaches and a research-led development of a catalogue of criteria for a kind of “literacity” of computer games have only rarely been attempted. Thus, one of the questions to be asked in the context of this conference is which relevance criteria are to be given special consideration in a computer game collection in a literature archive. For just as not every book is relevant to the collection mandate of the DLA, not every computer game will be included in
the collection. For this special collection in the DLA, an interdisciplinary research discussion is still needed to define collection criteria. First significant selection criteria – which are, however, yet to be discussed further – are, for example, the special handling of text and language in a game, in a broader sense than simply through literary objects (such as diaries, manuscripts, libraries, etc.) in the game. Furthermore, we do not wish to ask (as has become the practice in Game Studies) whether computer games are narrative, but rather in what way they are so. In addition to adaptations of literary works, games with reception traces that can be linked to authors and literary works certainly belong in a literature archive.

Subsequently, the criteria according to which computer games are classified must be clarified, as must the metadata used to list them in the library catalogue. A further challenge is the selection of the accompanying material that is to be archived alongside the game to which it is connected. Possibly there is a game developer’s private library, equivalent to an author’s private library, that needs to be consulted by researchers. And what forms of reception of computer games should the archive and library at the DLA take into account? Numerous activities of gaming culture seem relevant here, for example the staging of a computer game in a Let’s Play; the players and their interaction with and reception of computer games must, with greater urgency, become the subject of research and archives. But even the digital archive has its limits – the goal is never the ‘total archive’ – yet it remains to be determined how social media, for example, is to be collected and archived.

The analysis instruments
But what definition of text can we use, as a literature archive, with which to approach computer games? The media shift in literature not only calls the concept of text and literature into question, it also repeatedly demands that analytical methods and instruments be expanded and revised. How can computer games be adequately described in such contexts? It is often not enough simply to ‘apply’ established literary terms to computer games – when the aim is to describe computer games in their status as literary forms. These considerations are preceded by the question of what the specific literary narrative of computer games looks like.

The technologies of archiving and accessibility
In addition to these questions of content, the technical preservation of games and archiving strategies also currently pose challenges. For example, how do we deal with obsolete hardware and software? How can the interaction with recipients, players, be guaranteed at a technical and a curatorial level? How can and should computer games be stored for research in the long term? And finally, institutions are faced with various legal problems: For example, which licences for software and operating systems are to be obtained?

Key topics
We invite researchers at all career stages to submit contributions. Based on the key topics outlined above, contributions in the following areas are of particular interest:

We are pleased to welcome our keynote speakers Espen Aarseth, Réne Bauer, Astrid Ensslin and Beat Suter. In addition, Lena Falkenhagen will moderate the Game Culture Quartet (organized by the Foundation for Digital Games Culture) at the DLA Marbach.